Mainstream science is absolutely addicted to demonizing the sun as the primary cause of skin cancer, despite so much research proving otherwise and the fact that people closest to the equator have the lowest incidence of skin cancer. Worse yet is people still fall for this nonsense, slather on the sunscreen lowering important Vitamin D levels, leading to higher mortality, chronic illness and disease, mental health disorders, obesity, and ironically, cancer itself.

Click here to listen to a radio interview I did about Vitamin D and breast cancer - www.blogtalkradio.com/relationshiptalktoday/2013/10/27/the-link-between-vitamin-d-and-breast-cancer 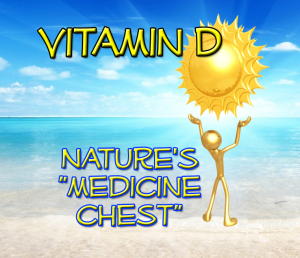 If vitamin D3 levels, received from the sun, among populations worldwide were increased - 600,000 cases of breast and colorectal cancers could be prevented each year, according to researchers from the Moores Cancer Center.
To increase your vitamin D3 levels, the researchers recommended a combination of dietary methods, supplements (see below) and sunlight exposure of about 10 to 15 minutes a day, with at least 40 percent of your skin exposed.

Exposure to sunlight and ultraviolet light has been repeatedly shown to NOT be the cause of skin cancer. Scientists from The University of Texas MD Anderson Cancer Center reported UVA exposure is unlikely to have contributed to the rise in the incidence of melanoma over the past 30 years.

The idea that sunscreen prevents cancer is also a myth promoted by pharmaceutical companies, conventional medicine and the sunscreen industry while making money on products that actually contain cancer-causing chemicals. Click here to learn how to make an all natural sunscreen yourself, or if you don't want to do that, this is one of the only brands I would use because it is actually all natural and organic

Spending an average of three hours a day exposed to sunlight can slash the risk of breast cancer by up to 50 percent.

People with the highest levels of vitamin D have the lowest risk of skin cancer.

Another way to reduce your risk of breast cancer is to avoid the toxins found in deodorant. These clog your pores not allowing your body to release toxins naturally. See my blog about that here.

Benefits of the Sun include reduction of (or cure) Anxiety, depression, panic, and other mental issues:

- A new study from University College London in the UK found that people with higher vitamin D levels had a 43% lower risk of depression, compared to people with vitamin D lower levels.
- Results published in Clinical Nutrition also indicated that the higher vitamin D levels were associated with a 67% lower risk of panic, compared to the lower levels.
- Data from the third US National Health and Nutrition Examination Survey revealed that people with vitamin D deficiency were at an 85% increased risk of having current depressive episodes, compared with people with sufficient levels (International Archives of Medicine , 2010, 3:29 doi:10.1186/1755-7682-3-29.
- According to the review (FASEB Journal, Vol.22, pp. 982-1001), the vitamin has been reported to affect proteins in the brain known to be directly involved in learning and memory, motor control, and possibly even maternal and social behavior. Depression in the elderly is highly prevalent and can increase the risk of medical illnesses, worsen the outcome of other medical illnesses, and may increase mortality.
- A recent study -- published in the European Journal of Clinical Nutrition -- revealed that adults with low vitamin D levels have a 30% greater risk of death than people who had higher levels. New research suggests that children are also likely to experience illness with low vitamin D levels.
- Children with serious and critical illnesses are more likely to be ill for longer, and experience more severe illness if they are deficient in vitamin D, according to the findings of two new research papers.
- The studies -- both published in Pediatrics -- reveal that 40% of children admitted into a hospital's paediatric intensive care unit (PICU) over a 12-month period were deficient in the sunshine vitamin, and that deficiency is directly associated with longer hospital stays and more severe illness.

- Low levels of vitamin D also doubles the risk of stroke according to a report by researchers at Johns Hopkins.
- Researchers at McGill University discovered a molecular basis for the cancer preventive effects of vitamin D, whereby its active form essentially shuts down cancer cells.
Their results are published in the latest edition of Proceedings of the National Academy of Sciences.

If you cannot get your vitamin D requirements from sun exposure, I recommend using a safe tanning bed. This means making sure they have electronic ballasts rather than magnetic ballasts, (this avoids exposure to EMF fields). Also checking to see if they provide UVB, rays with the UVA. Safe tanning beds also have less of the dangerous UVA than sunlight, while unsafe ones have more UVA than sunlight.

It is important to consider that exposure to UVB light is actually protective against melanoma (the most lethal form of skin cancer). As documented in The Lancet:
"Paradoxically, outdoor workers have a decreased risk of melanoma compared with indoor workers, suggesting that chronic sunlight exposure can have a protective effect."

Another study in Medical Hypotheses suggested that indoor workers may have increased rates of melanoma because they're exposed to sunlight through windows, and only UVA light, unlike UVB, can pass through window glass. (While UVB light causes your skin to produce vitamin D, UVA rays are the ones associated with skin damage and skin cancer.)
The medical literature stated additionally:
• Occupational exposure, such as farmers and fishermen, and regular weekend sun exposure are associated with decreased risk of melanoma
• Sun exposure appears to protect against melanoma on skin sites not exposed to sun light, and melanoma occurring on skin with large UV exposure has the best prognosis
• Patients with the highest blood levels of vitamin D have thinner melanoma and better survival prognosis than those with the lowest vitamin D levels

One study showed that two out of five children admitted to the study center's pediatric hospital ward were deficient in the vitamin (below 20 ng/ml), and had more severe illness on admission.

What About Vitamin D Supplements?

If neither sun exposure nor a safe tanning bed are feasible to get Vitamin D and other benefits of the sun, you're well advised to take an oral supplement. However, you need to make sure you're taking the right kind.

Most people know that D2 – the synthetic version commonly prescribed by doctors – is not as potent as D3. Each microgram of orally consumed 25-hydroxyvitamin D3 is about five times more effective in raising serum 25(OH)D than an equivalent amount of vitamin D2. However, besides being less potent, D2 supplements may actually do more harm than good overall.

IN Foods: Only vitamin D3 (cholecalciferol), the type of vitamin D found naturally in foods like eggs, organ meats, animal fat, cod liver oil, and fish, is appropriate for supplementation. Do NOT use the highly inferior vitamin D2. I also use this Cod Liver oil:

Also, when taking high dose vitamin D supplements, you ALSO need to take vitamin K2. The biological role of vitamin K2 is to help move calcium into the proper areas in your body, such as your bones and teeth and out of the areas it shouldn’t be, such as your arteries. Vitamin K2 deficiency is actually what produces the symptoms of vitamin D toxicity, which includes inappropriate calcification that can lead to hardening of your arteries. I use the one above containing both but if taking just D, than I would take this one when I am not eating fermented foods:

For sunburns – In addition to applying aloe (see how to extract pure Aloe Vera from the leaf here) I like Lavender Ess ential Oil, with a little coconut oil, (2-3 drops of Lavender oil with teaspoon of coconut oil) which has been shown in the research to be effective in soothing both burns and insect bites.

Against mosquitoes and other bugs - I can email you a link to a great oil to combat the bugs in summer. This blend contains 11 therapeutic-grade oils including citronella herb, eucalyptus, African Sandalwood, Rose Flower, and more.

To buy Therapeutic grade Edible Lavender and anti mosquito and other oils email me at info@theartofunity.com since the company has asked me not to put the oils directly in my blog.

While sun exposure is your best source for vitamin D, it's important to understand that not all sun exposure will allow for vitamin D production. The UVB rays are the only one’s that will offer Vitamin D and they are not always there when it is sunny.

Due to the physics and wavelength of UVB rays, they will only penetrate the atmosphere when the sun is above an angle of about 50° from the horizon. When the sun is lower than 50°, the ozone layer reflects the UVB-rays but let through the longer UVA-rays.

So how do you know when you can get the UVB rays?
If you have an iPhone or iPad you can download a free app called "D Minder", which will make all the calculations for you.

This video explains how to find out:

From a health perspective, it doesn't make much sense to expose your skin to the sun when it is lower than 50 degrees above the horizon because you will not receive any valuable UVB rays, but you will expose yourself to the more dangerous and potentially deadly UVA rays.
During the times of the year when UVB rays are not present where you live you essentially have two options: You can use a safe tanning bed or oral vitamin D3.

More than 75 percent of the world's population is vitamin D deficient and most don't know it! (Keep in mind it is also possible to have a level of Vitamin D that is too high.)
In order to be tested for your vitamin D level, for only $65 you can purchase the Vitamin D Action test kit here:

With there overwhelming evidence supporting the benefits of direct exposure to the sun and optimal vitamin D levels, perhaps we should start questioning why the media and conventional science is so adamant about telling us to cover up.

By utilizing the information presented on this site, you agree to and understand that author, Bill Farr is not a doctor or any other type of certified health care professional, and his opinion is not a substitute for professional medical prevention, diagnosis, or treatment. Please consult with your doctor or your other health care providers concerning your symptoms and medical requirements before following any of the remedies or other suggestions he offers. His opinion is based on his own research and is to be used for educational purposes only. Bill Farr’s wellness plans and advice are meant to be used in conjunction with standard allopathic or osteopathic medical treatment and care.